A tongue in cheek article from the Alumnae News in 1941 by L. Ashton 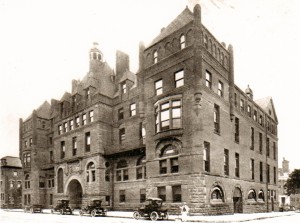 The old building still stands (67 College Street), but many changes take place within.  The square inch alley-way (between the tunnel and the laundry) you remember as you passed by, catching a glimpse of a dying O2 tent?  This has now been magically changed to a central supply room, and will be in working order by the time you read this.  Ruth Gaw, class Sept ‘ 31, has come back to take charge.  She has visited every hospital in Toronto that boasts of a central supply room.  By the reams of data, the detailed questions, and those horrible lists she is always giving us to fill out, we should, in the near future, have “The Model Central Supply Room.”

The Admitting Room – always noted for its spaciousness – has given up its History Room, and Mrs. Wright has donated her west wall to the worthy cause – yes, a “Blood Bank.”  Helen Anderson, class March, ’30, has bidden farewell to Thistletown and is joining our ranks – official capacity: “H.S.C’s No. 1 Bloodhound.”

Miss Grindlay, last spring, gave her old 2 ½ office as a present to Dr Alan Brown.  Now, magically built on the top of nothing, and reached by a door from the S.S.O., is her very nice, cozy new office.  Why not call and pay her a visit, and see it for yourself?

The Wards have tried to keep in style.  Many of the Service Rooms and pantries are in the newest pastel green.  We have tried to give each bed an extended vacation in Montreal, ostensibly for the purpose of being painted a beautiful daffodil yellow (returned nearer a putty brown).  Oh well, they seem to chip quite well!  Slight mixing of the parts renders the sides of the cribs incapable of being raised or lowered!

The Head Nurse’s desk no longer acts as the centre of a huddle at charting time.  Stretched behind it is a wall desk, ample room for three.  Also, the interns for quite a time have had one of their own – but they still prefer to sit in the Head Nurse’s chair!

Many of the Wards have new bed-trays – – sturdy yellow models that fit nicely over the kiddies’ knees.  The two-year-olds like to sit in them.  The only trouble here is that we haven’t nearly enough.  Say, that’s an idea for you, Dear Reader, a few donations would be gratefully received.