Prior to the dissolution of the Alumnae Association in 2012 our newsletter acknowledged the deaths of our fellow graduates as we learned about them.  We will continue to remember our HSC graduates here.

We count on class representatives, family and friends to notify us by email at info@hscnursingalumnae.org. A picture or two and a personal story would be a wonderful addition.

Let’s remember the contributions of these fellow graduates, how they helped to shape HSC while they were there and how they carried their knowledge and skills forward into the rest of their lives.

Prior to 2017 –  CLICK on the year to see other names and obituaries.

Deaths are listed by date within the year in descending order from December.

It is with heavy hearts that we announce the peaceful passing of Shirley at the Trent Valley Lodge Nursing Home while surrounded by her family on Thursday, November 11th, 2021. Shirley of Trenton, at the age of 86. Predeceased by… Read more2021 Shirley (Hallyburton) Steiner Cl’57

It is with great sadness that the family of Mrs. Marion Kathleen Chambers, née Harvey (Kitchener, Ontario), announces her passing on November 10, 2021, at the age of 87. Marion passed away in Cambridge, Ontario and will be lovingly remembered… Read more2021 Marion Kathleen (Harvey) Chambers Cl’57F 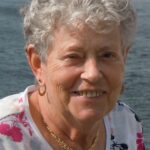 SUSAN ELIZABETH DEW (née Purdy), R.N. September 30, 1939 – September 30, 2021 I left this planet for uncharted territory today, with the hope of finding peace, to be pain-free without pills, and be able to breathe unattached to tubes,… Read more2021 Susan Elizabeth (Purdy) Dew Cl‘60F 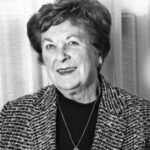 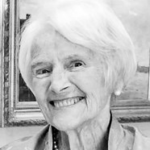 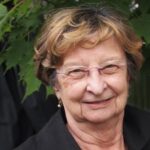 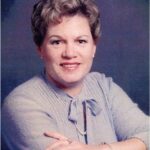 Joan died on December 24, 2020. “Her light has illuminated darkened paths, her gaze has lifted broken spirits and already her life has changed the course of many.” Born in Montreal, Joan took her nursing training at Toronto Sick Kids… Read more2020 Joan Morgan Farrow Cl’57 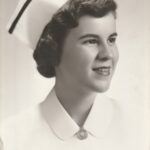 Joy Oliver, a graduate from the Cl’51, died on December 20, 2020. Peter Oliver, Joy’s son, wrote to the Alumnae recently and asked us to share the following….. Joy was a member of the HSC School of Nursing ’51 graduating… Read more2020 Joy Oliver (nee Gilley) Cl’51 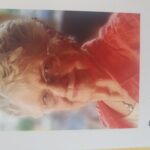 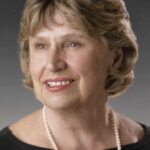 It is with sadness that we learned that Karen passed away on Monday, June 22, 2020 at the Peterborough Regional Hospital in her 72nd year. Much loved and cherished wife of nearly 50 years to Richard, devoted mother “Mutti” of… Read more2020 Mary Karen Brown (nee Wilson) Cl’68 Irma died on March 11, 2020. Her love of adventure and travel started when she immigrated to Canada from the Netherlands in 1954 at the age of two, settling in Ontario. She continued to pursue an adventurous life by becoming… Read more2020 Irma Seelen, Cl’73 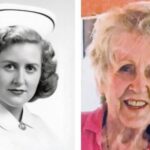 “Jackie died January 7, 2020 in her sleep exactly where she wanted to be, in her treasured family home in West Vancouver, BC. Born August 21, 1929 to Andrew and Norma (Kemp) Leslie, Jackie’s father was Saskatoon City Commissioner and… Read more2020 Jacqueline (Leslie) Beaubier Cl’51

A memorial website was set up by Boni’s family after her death on June 12, 2019. Stories and memories were requested and fellow classmate, Pat Coulman responded as follows: “Sadly, the local nursing classmates of your mom from the Sick… Read more2019 Boni (McDowell) Townsend Cl’62

We received notification of Barbara’s death on May 24, 2019. Unfortunately we have no further details. 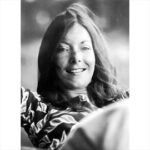 “Died peacefully at The Carpenter Hospice on May 16, 2019, two days before her birthday. Joanne was born May 18, 1946 in Toronto. She trained as a nurse at Sick Kids Hospital and worked with her husband Dennis at their… Read more2019 Joanne (Kennedy) Brodie Cl’69 “Peacefully, with family by her side, Carol passed at Joseph Brant Hospital on Monday, July 31, 2017 at the age of 81. Predeceased by her loving husband Allan (2015). Beloved mother to Denise (Les) Rewegan, and Michelle Benn (John Burns)…. Read more2017 Carol Ann (Fearncombe) Benn Cl’57

“We are sad to announce the passing of our mother Margaret Jane Banfield at home peacefully on Monday, February 20th, 2017 with family by her side. Margaret was born in Toronto on December 7th, 1923 (the youngest of 4 children)… Read more2017 Margaret Jane (Warren) Banfield Cl’46S

We were made aware of the deaths of these three HSC graduates in 2017. Unfortunately we have no further information at this time. Janet (Colley) Tomes Cl’48F died in April 2017 Lynne Beckett Cl’62 died in September 2017 Janet (Taylor)… Read more2017 Ella (Barkwell) Hall Cl’45F Passed away peacefully in her 92nd year in Montreal on Monday, November 10, 2014. Predeceased by her beloved husband Rea Hall, her brothers and sisters Pauline, Antoinette, Lesley and Kirbel, and survived by her beloved sister… Read more2014 Three HSC grads… 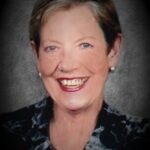 Margaret (Nesbitt) Pozner, Cl’45F Margaret died on December 29, 2012.  She was the beloved wife of the late Albert and loving mother of Brian (Kendra) and Susan. Grandmother of Jesse and Daniel. She is survived by her sister Mary Ball… Read more2012 Six HSC grads…

Prior to the devolution of the HSC Nursing Alumnae Association in the Fall of 2011 and the beginning of our website, the deaths of HSC graduates were published in the Alumnae News. Here are the last newsletters from the Spring… Read more2010 – 2011