Note:  This article appears in the 1950 edition of “The Alumnae News”.  It provides a wonderful overview of life and times at HSC as staff plan for their upcoming move from College Street (1892 – 1951) to 555 University Avenue.  Many graduates will remember this transition, the rest of us will cherish our training and working days in the new hospital.  Some of us saw the addition of the Elm Street Wing, New ICU, and ultimately the addition of the Atrium patient care tower on Elizabeth St in 1993.

“Our Superintendent of Nurses, Miss Jean I. Masten, has become as versatile as Florence Nightingale was reputed to have been!  Not only does she keep the School on a steady keel throughout these testing times of uncertainty regarding the move to the new building, but she herself (if she had the time) could apply for her engineer’s papers, plumbing license, drafting diploma, architect’s assistantship, and degree in hospital management with a major in Ordering Equipment Which Is Advertised But Rarely Available.

Thus, as she speeds by with scrolls of blue prints under her arm, we the Editors hesitate to ask her to take the time to write a special message for you this year.  However, we have been able to obtain a copy of the Sixty Fourth Annual report which she presented at the Graduation Exercises on June 13, 1950, and with her permission are reprinting herewith certain excerpts which we know will interest you. 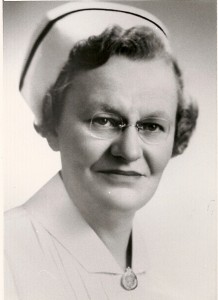 “……Some of the things that have been accomplished during the fifty-eight years that the old building has sheltered the hospital and the school.

When the present hospital was opened in 1892, seven nurses had graduated from the School.  During the ensuing fifty-eight years, 1288 nurses have received their training under this roof, including the thirty-seven members of tonight’s graduating class.  We believe we shall have a more substantial representation to move from the old to the new building later this year.

The two names that stand out in connection with the present building are of course those of John Ross Robertson, almost synonymous with the Hospital for Sick Children, and Louise Brent, Superintendent of the Hospital and the Nursing School from 1896 – 1913.  This was the era of great benefactors and great nursing pioneers and the Hospital for Sick  Children was wonderfully blessed in the team work of these two exceptional people who laid down the foundations for the Hospital and the Nursing School as solid and honest as the Credit Valley Stone, on which our staunch old building stands.

Miss Brent increased the nursing course from two years to three, established the first preliminary training school in Canada, established a short course for Nursery Aides, and was an outstanding figure in the Canadian Society of superintendent of Training Schools.  She also ran the entire organization.  Meanwhile, Mr. Robertson provided advanced facilities by building the finest nurses’ residence in the country and yearly making possible the addition of new hospital services and necessary alterations.

It is inspiring to read of these early and progressive years and the vision that inspired our predecessors.  Perhaps our greatest responsibility and challenge will be to carry over from the old to the new all those qualities of heart and brain established so soundly by these two as well as by the outstanding surgeons, physicians and nurses who, throughout the years, have built up our present hospital.

After the opening of the country Branch (at Thistletown), the Course for Nursery Aides was chiefly carried out there.  However, within the last few years the Provincial Government has set up an excellent course to train nursing assistants, and in view of this our course was discontinued last year.  At the same time we were approached by the Provincial authorities responsible for nursing education, and asked to extend our already large affiliate programme.  We therefore agreed to make certain alterations at Thistletown and accept a continuous rotation of twenty nurses for eight weeks experience on the wards there.  These students spend the last four weeks of their affiliation at the City Hospital.  ………………

A great deal of time has been spent during the year by members of the graduate staff in considering equipment and nursing methods for the new building.  It is impossible to realize beforehand how much detail must go into the selection of waste disposal units, paper towel containers, linen carries and such rather humdrum requirements, quite apart from the important pieces of hospital furniture and equipment.  Closely associated with this work has been Mr. Donald Long, the Head of the Carpentry Department, without whose inventive genius and technical skill infinitely less could have been achieved.  I think we all find it a tonic to go over to the new building and see the space, air, and sunlight on the ward floors, especially since the painting has begun.

No radical changes have been made in the student programme during the year, but some improvements in the integration of theory and practice have been achieved.  Facilities for experience in the nursing care of children together with a teaching programme (is provided for) student nurses from seven city and twenty-two schools in the Province. ………The teaching programme is carried on continuously throughout the year by the physicians and surgeons in addition to various types of nursing instruction…….We are looking forward to bettering our teaching in the new building.

Each year I am confronted with the difficulty of finding words to express my appreciation of the work carried on by the nursing staff.  The demands on their patience, strength, and skill continually increases, and yet they provide throughout the hospital the cushion that absorbs the sharp impact, serves the public and the medical staff, and most important of all, ensures a security for the patients, without which a children’s hospital could achieve little. ……………..”