(Barb wrote this reflection as the hospital was about to open its newest patient care wing, The Atrium on Elizabeth directly behind 555 University Ave)

The “new” HSC formally opened its doors January 15, 1951 at 2:00 PM.  The event was attended by R.A. Laidlaw, Chairman of the board, Mayor Hiram McCalum and Premier Leslie Frost.

“The Hospital That Friends Built” represented an investment of $12,500,000.  Its 13 stories were to become the world’s major research and treatment centre for children’s diseases.  It could house 632 inpatients and had the largest out patient department in the world.

Some of the Alumnae will remember the impact of television and noiseless light switches in the new HSC!

The move from the College Street Hospital which had served children from 1892 – 1951 was so well orchestrated that the entire move took less than 4 hours.  The children were transferred by wheelchairs, cabs, ambulances and volunteers and the team work between the police, the hospital staff and the volunteers was inspiring.

I put on my cape, almost the last one to leave and walked alone down Elizabeth Street to report in on a new ward with entirely changed surroundings.

By the time the noon meds were needed, it was discovered that the Narcotic Record Book had been left behind and I was dispatched to return to the old ward and fetch it.

I deliberately went in the front door, off college Street, and slowly walked up the wide stone steps, past the beautiful stained glass window and along the main hall.  I knew I would never have the chance to be there again and to look around and experience my feelings.

No one saw me as I walked along the deserted ward, past empty beds – an already melancholy quietness.  There was one shoe lying half into the aisle and the sun shone on it.  I knew it was a moment that was etched in my life.

I went into the tiny, windowless, darkened treatment room and collected the Narcotics book and pulled myself away. 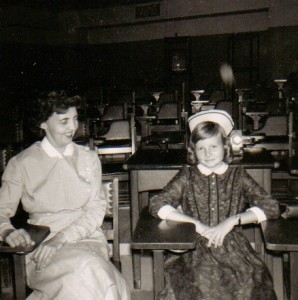