Graduates were asked to reflect on their most memorable experiences at HSC for the Alumnae’s 100th Anniversary in 2003.  A booklet was assembled at that time and parts of Arline’s reflections were used to round out the story of the Alumnae Association.  Here is her reflection in full.  Arline wrote: 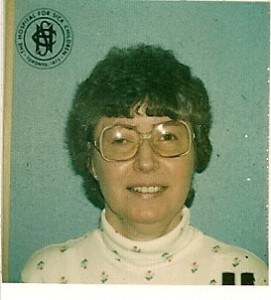 “I had many memorable experiences during my training at HSC.  Here are just three special memories that I’ll never forget.  From the time that I was still a small child, I was going to be a nurse for children, so that I could wear a cape!  It was such a privilege to train at HSC.  However, not every shift was a happy one.  Some days were just plain draining.

I was just a new graduate, and my assignment that day was to be in charge of all treatments and medications for the ward.  As I walked down the hall, I passed by the room of a little two-year-old girl.  She was dying of biliary atresia.  There was just no cure.  Her parents were young, and they couldn’t cope with their daughter’s severe illness.  They rarely came to visit.  Peering in the door of her single room, where she was alone, a little voice inside me said, “Go in, pick her up.”  I walked in and lifted her little body out of her crib, and gently held her in my arms.  She died just a few minutes later.  God didn’t mean for her to die alone in there.  I’m just so glad that I was there for her.

After a year of hands-on training at HSC, it was my turn to work at TGH, on a male medical ward.  Before working with adults, we had several classes covering all aspects of “Nursing Your Adult Patient”.  One of those classes was all about the ‘bed bath’.  Bathing children was never a problem for me.  However, giving an adult patient his bed bath posed some problems.  What if that adult male patient could not “finish” his own bath?  What would you do then?  We were told in class that you could request the male orderly on the ward to do this for you.  The first day went relatively well. The first adult patient was a young guy with Guillain-Barre Syndrome.  He was very much alert, but was paralyzed, from the neck down.  When it came time to “finish” his bath, I called in an orderly to do it.  I just breathed a sigh of relief, and went on with my other work.  I had the same patient the next day.  But, when I offered to fetch the orderly to “finish” the bath, he said, “That’s OK, you can do it this time.”  I was mortified!  This young man was very alert, and watched with great amusement, as I went red in the face, then “finished” his bath.  My thoughts, after that experience, were – “I think I will stick to children.”

Another adult experience at TGH was on a female ward.  The beds were quite narrow, with several lined up in a row.  Every unit consisted of a night table, one chair, and those “skinny” little beds.  My grossly overweight patient had recently suffered a major stroke and was paralyzed, on her right side.  I completed her bed bath and then needed to change her bed.  How was I going to do this?  This woman must have weighed in at 300+ pounds and barely fit on the bed.  I asked her if she could possibly put her weight over on her good left side then gradually slip onto the chair which was right next to the bed.  I would then help her move further into this chair, so that I could make her bed properly.  I just don’t know what I was thinking!!  How could I ever begin to support this  lady?  I weighed only 110 pounds myself.  She maneuvered herself over to the side of thee bed, and I then proceeded to help her toward the chair.  At that particular point, we just both began to laugh.  She missed the chair because I just couldn’t begin to hold her up and her left side wasn’t strong enough to help herself.  We both laughed so hard, as she continued to slip down, and land “gently” on the floor.  I went to the Head Nurse to ask for help.  It took every nurse on the ward (all 6 of us) to get this lady back into that chair, then into her finished bed.  Next time I asked for help before trying to move a patient.”