In 2003 when Donna and other graduates were asked to share favourite memories of HSC for the 100th Anniversary of the Alumnae, she was still working at Sick Kids in the Poison Centre.  Her problem, she said, was not one of remembering the past but rather choosing which experiences to share.  At that time she had 34 years of memories to draw on. As of November 2010 Donna continues to work in the Poison Centre at SickKids.

Her original submission has been edited here for length.  Thanks for sharing these memories, Donna. 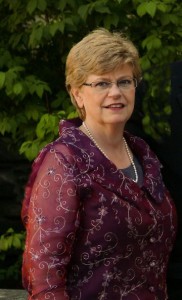 Donna writes, “HSC has been good to me over the years; I am still proud to work there.  I enjoy my job in the Poison Centre very much, although it is certainly not traditional nursing.  I spent several years at HSC on 6C (medical), Emergency and then the ICU.  I am proud to work at one of the best paediatric hospitals in the world…………………..I feel a sense of pride when the media reports that the a child has been taken to the Hospital for Sick Children.  My colleague’s child had emergency surgery this year at HSC and she said “the care was 110 percent from the time we came in the door to ten days later when we left.”  I realize this is not always the case, but staff does strive for excellence.”

“I grew up on a farm near Elora, Ontario, so moving to downtown Toronto was exciting and also frightening for me.  Fortunately, I met a friendly girl on the street outside the front entrance of the Elizabeth McMaster building who was also moving into residence.  (This girl) was to become one of my best friends, and we still see each other regularly.”

“I have memories of going back and forth through the tunnel from the hospital and cafeteria to the residence.  We all helped ourselves to the doctors’ OR scrub suits.  We lounged and studied in those jumpsuits.  I do remember getting into trouble though.  We were having a class party and were moving the piano from the basement to our floor.  The elevator was packed with students and the piano.  I happened to be at the front and I can still remember the lady at the desk crossly saying in her Scottish brogue, “Miss Shantz, come here!”  I can’t remember her exact words, but I had to get off the elevator, walk across the floor to the front desk and face her wrath.”

Donna goes on to tell us about a crisis at the hospital that occurred on January 9, 2001.  There was a serious fire in the hospital when a Toronto hydro vault exploded under the receiving area.

Donna writes, “The following, as background, is taken from This Week, HSC’s weekly newsletter:

Fire engines screamed towards the hospital and began what turned out to be a two-hour battle with what one fireman described as the most intense fire he had ever seen.  At times, the flames shot as high as the third story of the Elm Wing.

By 6:30 pm, intense, dark smoke began to infiltrate the Atrium and a Code Red became a Code Green – Evacuation.  Parents and visitors were quickly ushered from the building and patient care staff began to move patients.  More emergency help arrived from the Toronto Police Services, Ambulance Services and the Toronto Transit Commission (TTC)…

The smoke was heaviest on the south side of the building – Neonatal Intensive Care (NICU), Critical Care (CCU), and Units C and D…the north sided units were much less affected.

The NICU, staff quickly decided that the nine babies on ventilators should be moved to safety in the NICU at Mt Sinai.  The tunnels that usually link the buildings were inaccessible because of smoke.  Babies were loaded into a waiting TTC bus and a few others were pushed across the street – each with nurses, physicians and an escort of Toronto Police.

The CCU staff sent an advance team to the Post Anesthetic Care Unit and quickly set it up to receive the patients from the CCU…evacuation of the CCU took 20 minutes.  One child who was on ECMO was left in the CCU with his physician and nurse, the decision made that he would only be evacuated if absolutely necessary.

On other floors, children were moved to the north side of the building by staff and physicians.

All the patients were safe throughout and there were no injuries…one security guard briefly visited Toronto General Emergency for smoke inhalation but was released the same evening.”

Donna continues, “I was with my colleagues in the Poison Centre, when the evacuation alarm began to ring.  We were on the 7th floor in the Gerrard Wing, so after forwarding our calls to the Ottawa Poison Centre, we made a hasty exit down the darkened staircase.  When we reached the main floor, the glass enclosed Atrium had thick smoke throughout it.

Since we had no patients, we went up the smoke-filled stairway in the Atrium to help move beds laterally to the north wing.  The seriousness of the event was apparent when there were firefighters at the nursing stations on the units.  Nurses’ eyes were quite red from the irritating smoke.

I remember watching a movie during our training where we were taught that in the event of a fire, we should place several babies on a blanket and drag it.  These days, with all the equipment, this is impractical.  During the HSC fire, I saw an intubated preemie being carried down the steps, being bagged, with 4-5 staff members assisting with all the equipment and lines.  Pictures in the media showed babies in isolettes being pushed across University Avenue, each with several health care professionals in attendance.

Since the explosion occurred close to change of shift in the evening, the day shift was still present, and the night shift was arriving.  All nurses and doctors going up the stairs had their names recorded, so there was documentation of who was in the building.  I felt very emotional as I saw nurses and doctors running up the stairs in the thick smoke to their patients.

The nurse and doctor who stayed with the patient in the CCU who could not be moved are to be commended.  I had walked through that area with a colleague en route to help in another unit and the smoke was very thick, requiring us to cover our noses and mouths.

After patients had been moved, my colleagues and I went to the emergency department where anxious parents were forced to wait.  They had not been allowed to go upstairs in the building, so we tried to keep them up to date on their children.  We called the floors to confirm the location of the children and were able to inform the parents that they had been safely moved to another wing.

When I arrived home later that evening and watched the news on television I realized how massive the fire had been.  There were huge columns of thick black smoke billowing from the hospital.  As reported in This Week, “Everyone marveled at the calm and professional manner in which the entire hospital staff rose to the occasion.”