Joan Raymond, class representative from the September Cl’57, sent along the following note on their 60th reunion, held on Sept 15, 2017 at The York Club in Toronto.  She tells us that 15 members enjoyed a lovely luncheon there although the plan had been to return to The Briars on Lake Simcoe.  Joan goes on to say, “Our class have had their reunions there since 1992 and every two years since 2002.  When I contacted The Briars to book the 2017 Reunion, I learned that the lovely Kae Ferraro had retired and all the rules had changed.”  Unfortunately, the class members didn’t feel they could make the changes required “so we reluctantly and sadly had to abandon the Briars”.  However, it sounds as if they had a wonderful time at The York Club.  It’s very special to be able to reunite after 60 years. Clearly this class has kept in touch with one another frequently over the years.  Congratulations! 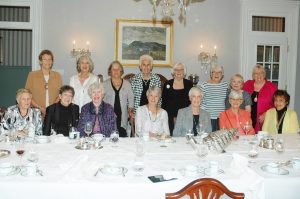